Input-Output Analysis has served as a primary tool for tracing the economic linkages between various economic sectors and whole communities since the 1930s. This study utilized input-output analysis to show direct, indirect, and induced industry output and employment as a result of institutional E&G (Education & General) expenditures, construction, independent operations and related student expenditures, and visitor activity.

Total student expenditures were based on college living budgets reported by the institutions to the College Board. Specifically designated expenditures for transportation and books were coded within those industry clusters, while miscellaneous expenses were based on the Consumer Expenditure Survey purchase patterns of persons between the ages of 18-24. Corresponding expenditures from the colleges’ auxiliary operations, such as room and board and food services, were subtracted from the students’ total expenditures to avoid double counting. The distribution of faculty and staff expenditures was also based on the spending patterns reported in the Consumer Expenditure Survey.

Visitor expenditures were based on estimates of visitor “person-days” based on college enrollment and college revenue. Average daily expenditures and expenditure types were derived from visitor and tourist budgets computed by the Indiana Department of Tourism and the Travel Industry of America. The estimation of the number of “person days” was based on a methodology used in a study to calculate the impact of visitors to the University of Wisconsin System.

Operations expenditures were based on national patterns of college spending that were derived from the 2016 United States Input-Output (USIO) Benchmark Table from the Bureau of Economic Analysis. The spending patterns in the USIO provide an estimate of all college spending and do not take into account the unique spending patterns of specialized universities. Because capital spending is cyclical, the Economic Impact Calculator tool provides a separate calculation of this activity. It is suggested that colleges use a five-year window, and report the results as a “Five-Year Impact.” However, the EI tool can provide estimates for any timeframe.

To estimate the impact of the Independent Colleges and Universities of Indiana’s expenditures on the state’s economy and to understand the linkages, or dollar flows, between higher education activity and its supplying sectors, an Input-Output (IO) table was developed by updating a 72 sector 2016 Annual USIO table. The table was updated for 2017 prices and employment based on various national and local sources. To “regionalize” the table and estimate state activity, a standard location quotient (LQ) update method was applied to the US table– where individual values from the IO technical coefficient, or “A” matrix, are proportionately adjusted based on state employment LQs derived from the 2017 US County Business Patterns. LQs are based on the ratio of the percent of persons employed in each industry in Indiana to the percent employed in each industry nationally.

In considering the impact or multiplier effect under this technique, it is important to recognize that this method, like all non-survey or partial survey-based IO tables, represents an estimate of actual economic activity. Because of individual supplier arrangements between individual business establishments and unique consumer preferences, it is impossible to state precisely the extent to which all transactions actually occurred within state boundaries. The LQ method assumes that a state is relatively “self-sufficient” in meeting statewide demand for inputs that have at least the national percent employed in a particular industry. Separate multipliers were calculated for operations, faculty and staff, students, long term capital expenditures, alumni, and tourism activity.

The estimates of generated federal tax revenue are based on estimates derived from the Consumer Expenditure Survey and methods from other economic impact studies. The tax rates used to estimate statewide generated tax revenue are based on effective tax rates derived from Individual Tax Return Data and the Annual Report of Collections and Distributions from the Indiana Department of Revenue. 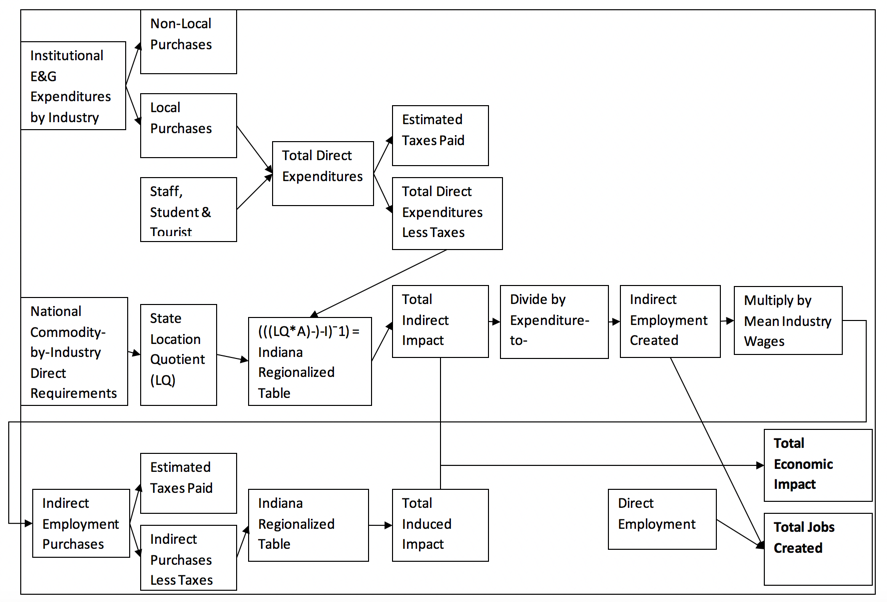