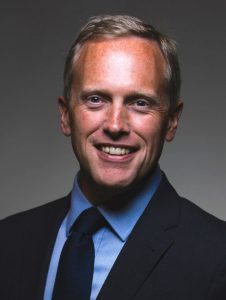 Kurt Dykstra, currently the president of Trinity College (Illinois), has been named the next president and CEO of Independent Colleges of Indiana (ICI). Founded in 1948 and headquartered in Indianapolis, ICI is a membership association representing Indiana’s 29 private, non-profit colleges and universities. Dykstra will begin his term on July 5, 2022, succeeding Dr. David W. Wantz who is retiring after five years as president of ICI.

Dykstra has served as the president of Trinity since 2015, during which time he oversaw increased fundraising, completed a new comprehensive campus master plan that included the expansion of campus boundaries, developed new institutional partnerships, and increased freshmen enrollment, even during the COVID-19 pandemic. He previously served as an adjunct assistant professor of management at Hope College (Michigan). He also has served on the Council of Presidents of the National Association of Intercollegiate Athletics, the public policy subcommittee of the National Association of Independent Colleges and Universities, the executive committee of the Federation of Independent Illinois Colleges and Universities, as well as on the board of Northwestern College (Iowa), his alma mater.

In addition to his experience in higher education, Dykstra served for three terms as mayor of the City of Holland, Michigan, overseeing the largest municipal infrastructure investment in the city’s history and developing over $600 million in new business investments. A lawyer by education and training, he previously served as a senior vice president at a large, Michigan-based bank, an attorney at two “National Law Journal 500” firms, and a former judicial law clerk for the Honorable Ann Walsh Bradley, Associate Justice of the Wisconsin Supreme Court.

“President Dykstra brings an impressive range of experiences to this role, each of which will be important as he advocates for ICI member schools,” says Dr. Dave McFadden, chair of the ICI board and president of Manchester University. “Collectively and individually, ICI members are powerhouses in higher education and in President Dykstra we’ve found someone who will serve us and Hoosiers very effectively.”

Dykstra earned a Doctor of Jurisprudence with highest honors from the Marquette University Law School (Wisconsin), a Bachelor of Arts with high honors from Northwestern College (Iowa), and will complete a Master of Laws at the London School of Economics and Political Science (England) later this year.

“I’m very excited for this opportunity,” says Dykstra. “ICI is an important organization, representing 29 extraordinary colleges and universities that serve 100,000 students and collectively have a $5.5 billion impact on the Indiana economy. I look forward to being part of the good work that Indiana’s private colleges and universities do on behalf of their students, employees, alumni, communities, and the state.”

Dykstra is a native of Wisconsin, though has lived in Iowa, Michigan, and Illinois as well. He and his wife, Leah, have been married for 29 years and have two adult daughters.

About Independent Colleges of Indiana

Independent Colleges of Indiana serves as the collective voice for the state’s 29 private, non-profit colleges and universities. ICI institutions employ over 22,000 Hoosiers and generate a total local economic impact of over $5 billion annually. Students at ICI colleges have Indiana’s highest four-year, on-time graduation rates, and ICI institutions produce 30 percent of Indiana’s bachelor’s degrees while enrolling 20 percent of its undergraduates.