The Indiana Academy hosted its 50th anniversary with a gala at the Columbia Club in Indianapolis on Monday, October 18. The eight members—Class of 2020 and Class of 2021—honored at this year’s gala are featured below. 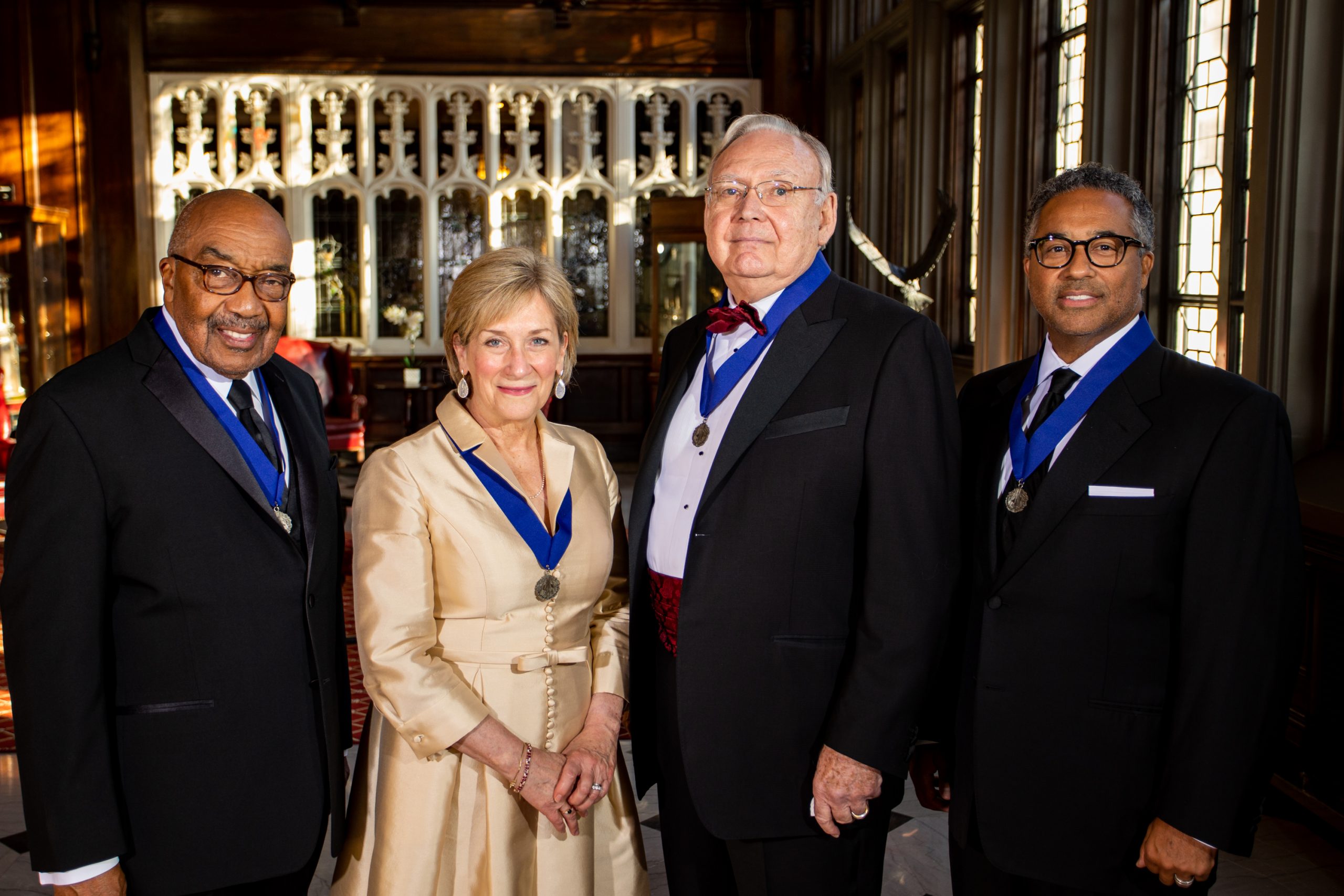 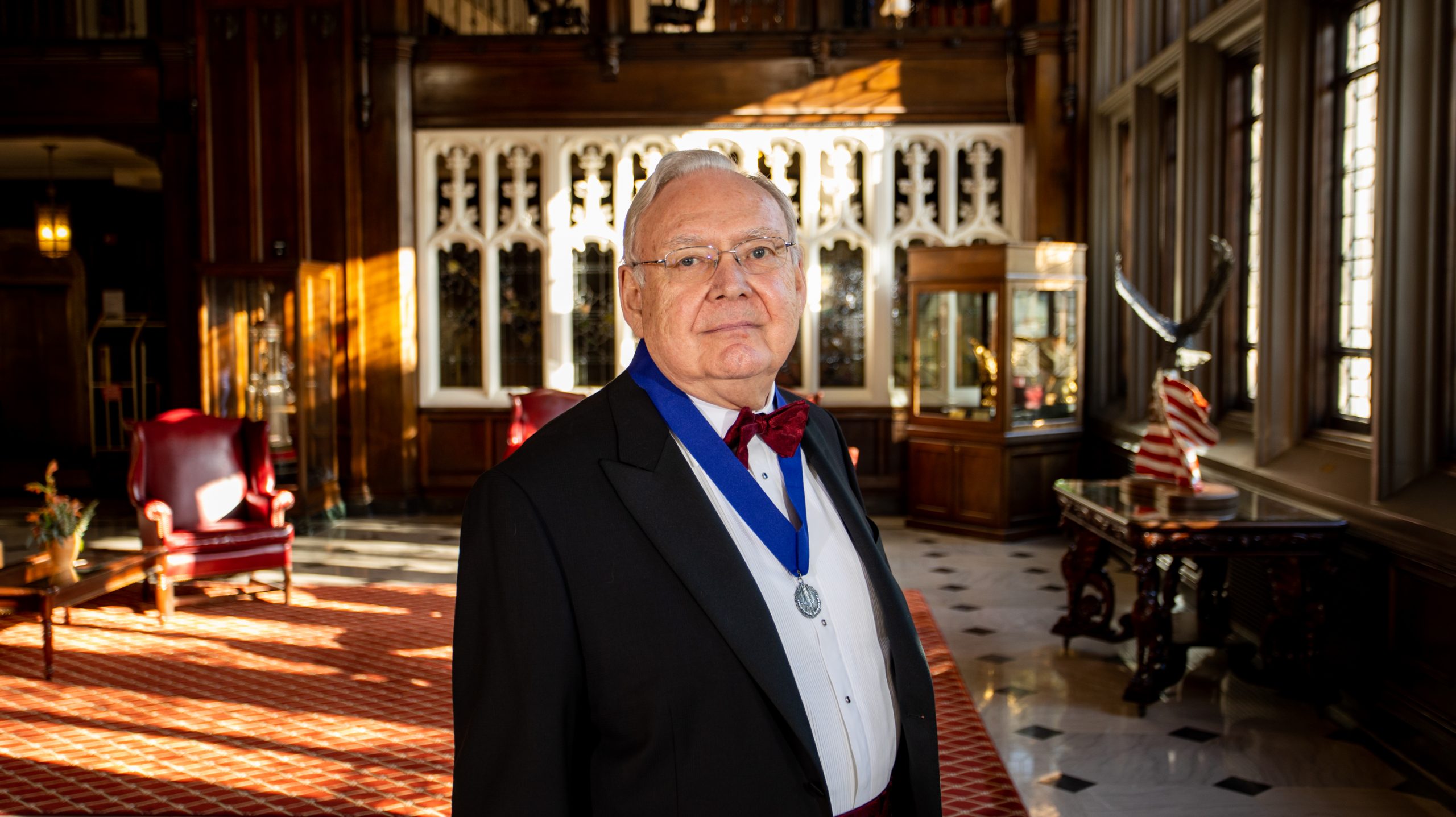 Earl A. Goode is the longest-serving gubernatorial chief of staff in Indiana history, serving both GovernorEric Holcomb and Governor Mitch Daniels.

In 2015, Goode became president of Indianapolis’ Capital Improvement Board, which owns and operates the city’s sports stadiums, convention center, and parking garages. From 2001 to 2006, he served as board chairman for the Indiana Sports Corp. and was instrumental in relocating the National Collegiate Athletic Association to Indianapolis and recruiting the Solheim Cup to Central Indiana.

In 2000, Goode concluded a 39-year career with GTE (now Verizon), where he served as president of four GTE business units. He served as chairman of the executive committee for the GTE North Classic seniors golf tournament and for the GTE U.S. Men’s Hard-Court championships, and co-founded the Pioneering Partners program, along with the Great Lakes Governors Association and then-Wisconsin Governor Tommy Thompson, to recognize teacher excellence across the Great Lakes region.

Goode and his wife, Vickie, have a daughter, Kimberly. 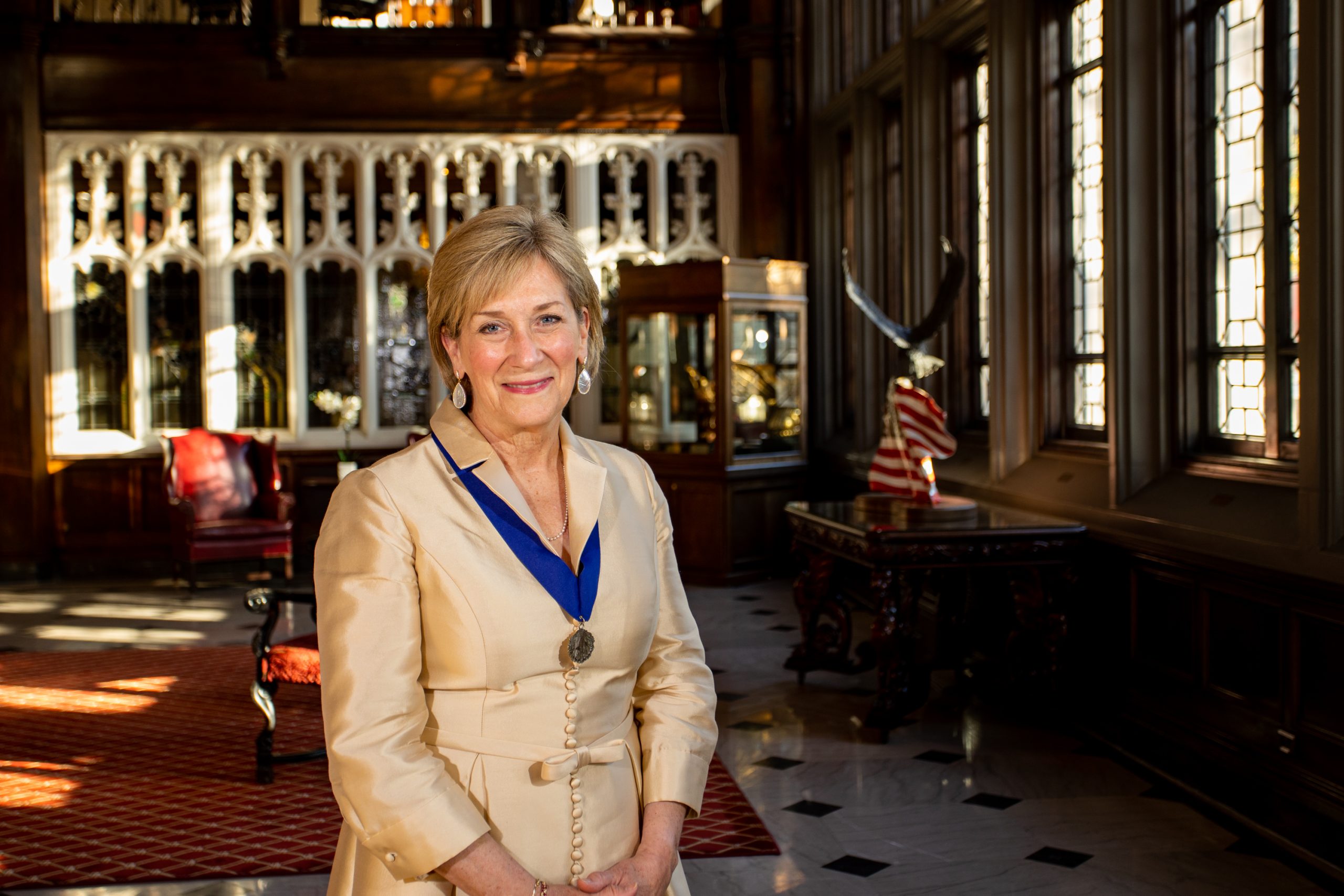 Patty Strauss Grant is executive director of the CommunityFoundation of Wabash County. A life-long resident of North Manchester, Grant has served to advance educational attainment in various capacities throughout her 30-year tenure at the Community Foundation.

Leveraging the generosity of Lilly Endowment’s seven phases of the GIFT Initiative, her leadership supported the Foundation’s asset growth from $15,000 in 1990 to over $73 million today. Foundation scholarship assets exceed $12 million and provide scholarships to over 300 students annually.

A graduate of DePauw University and the University of Chicago Booth School of Business, she serves as a trustee and board secretary of Manchester University and a member of the audit, student life, executive committees. She is a member of the boards of Parkview Hospital Wabash, Grow Wabash County, and the Northeast Indiana Regional Partnership. Grant has helped to support the growth of numerous Wabash County charities and nonprofits including Heartland Learning Center, Friendship Hill (an all-inclusive playground), Honeywell Foundation, Babe of Wabash County, and Daniel’s Place.

Grant and her husband, David, reside in North Manchester. They have three daughters, Sarah, Leah, and Emily. 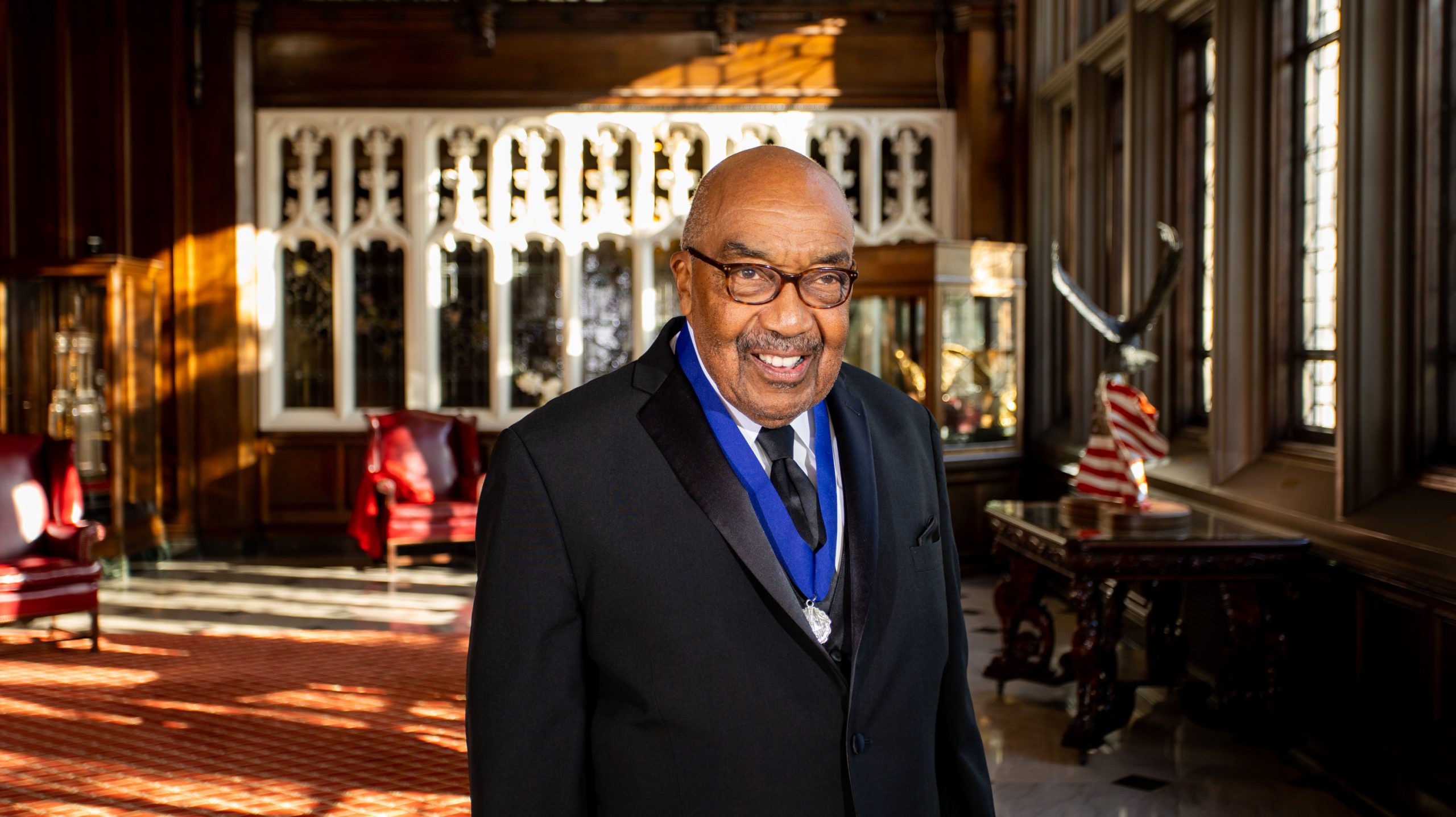 William Shrewsberry served for 17 years as president and CEO of Shrewsberry & Associates, LLC, an engineering consulting firm he founded in 2001. He has been instrumental in the development of several major projects in Indianapolis, including the new Indianapolis International Airport midfield terminal, Eskenazi Hospital, and the Indianapolis/Marion County Community Justice Campus.

Prior to founding Shrewsberry & Associates, he retired from Ameritech after more than 20 years in engineering and management.

After four terms on the Jeffersonville City Council, he served as a member of Governor Evan Bayh’s senior staff, commissioner of the Indiana Department of Administration, deputy mayor of public policy for Indianapolis Mayor Bart Peterson, and executive director of the White River State Park.

Shrewsberry was appointed the first chair of the Mayor’s Charter School Board, a role he held under Mayor Peterson and Mayor Greg Ballard. He has served on the boards of The Mind Trust, IUPUI, IU School of Public and Environmental Affairs, IU Methodist Health Foundation, Indianapolis Monumental Marathon, Indiana Sports Corp., GIPC, and Madam Walker Legacy Center. He has also served as a Hanover College trustee and the 2012 Super Bowl Operations Division Chairman. 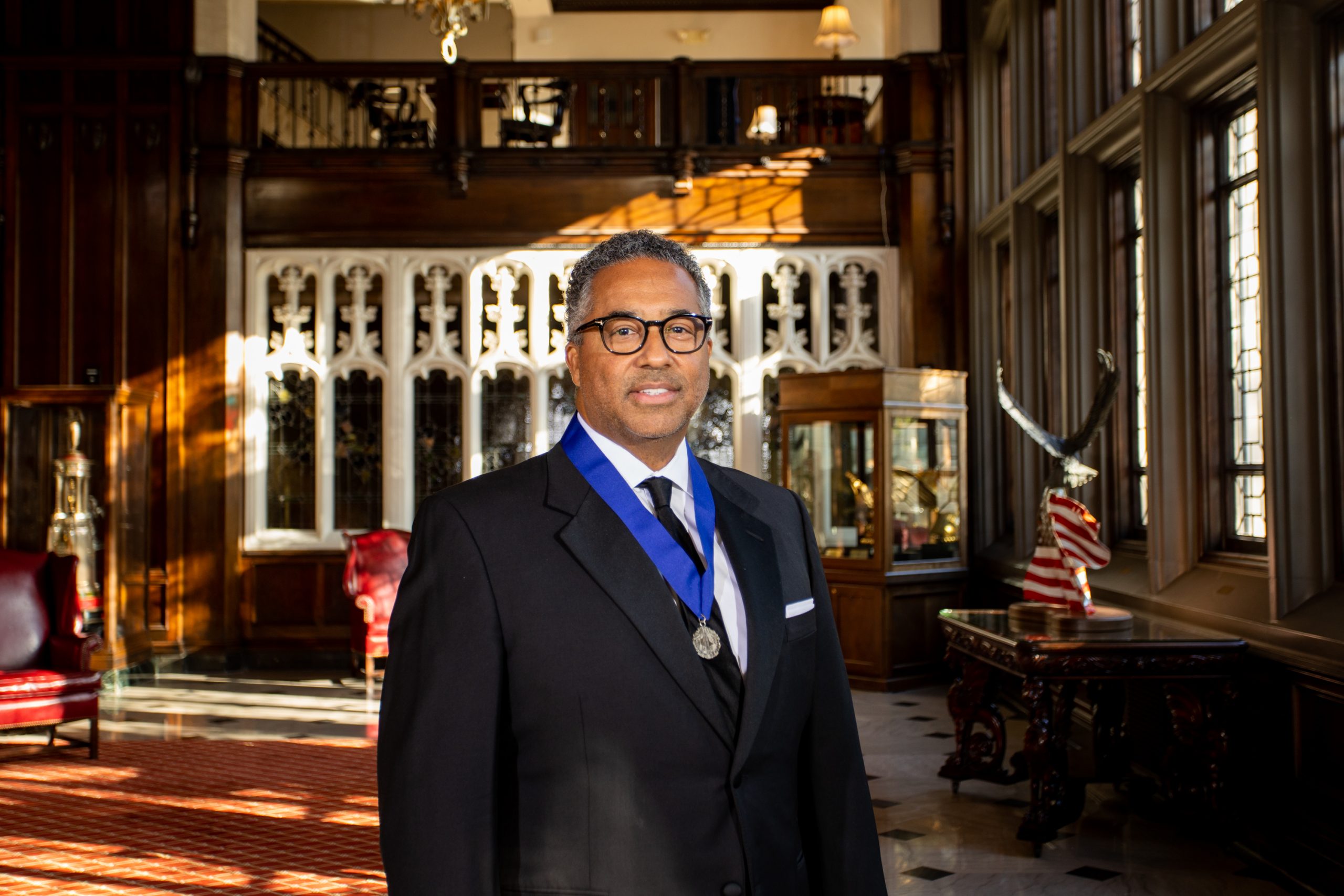 Nationally renowned in the world of sports and entertainment, Max Siegel has been the CEO of USA Track & Field (USATF) since 2012. In the years since, he has led USATF to unprecedented financial growth, successfully bid for the U.S. hosting of the 2021 IAAF World Outdoor Championships, and secured an historic contract with Nike.

He previously served as president of global operations at Dale Earnhardt Inc., where he sold tens of millions of dollars in sponsorships, as senior vice president at Sony/BMG, and as president of Zomba Gospel, Tommy Boy Gospel and Verity Records, where he led one of the most profitable divisions in the Sony/BMG system.

As the owner of Rev Racing since 2010, Siegel has led NASCAR’s Drive for Diversity (D4D) program to bring more multicultural and female talent to the sport, advancing it from a fledgling effort into a competitive juggernaut on the racetrack.

He is a member of the board of directors of the Ross Initiative in Sports for Equality (RISE), as well as the board of trustees at Martin University and Brebeuf Jesuit High School in Indianapolis. He is an accomplished author of three books and a film producer.

The first African-American to graduate with honors from Notre Dame Law School, Siegel is a native of Indianapolis. He and his wife, Jennifer, are parents of three children, Max II, Matthew, and Madeline. 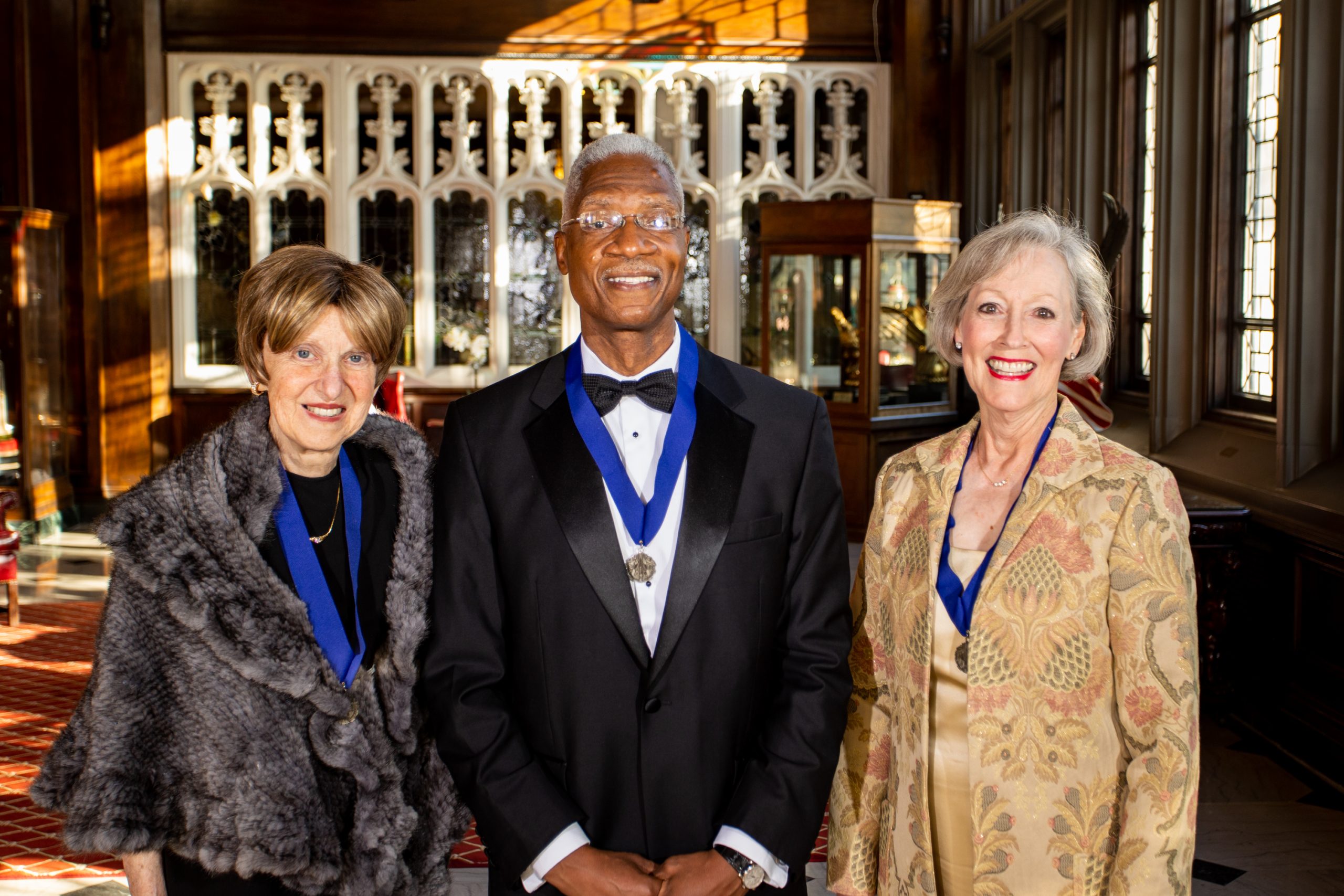 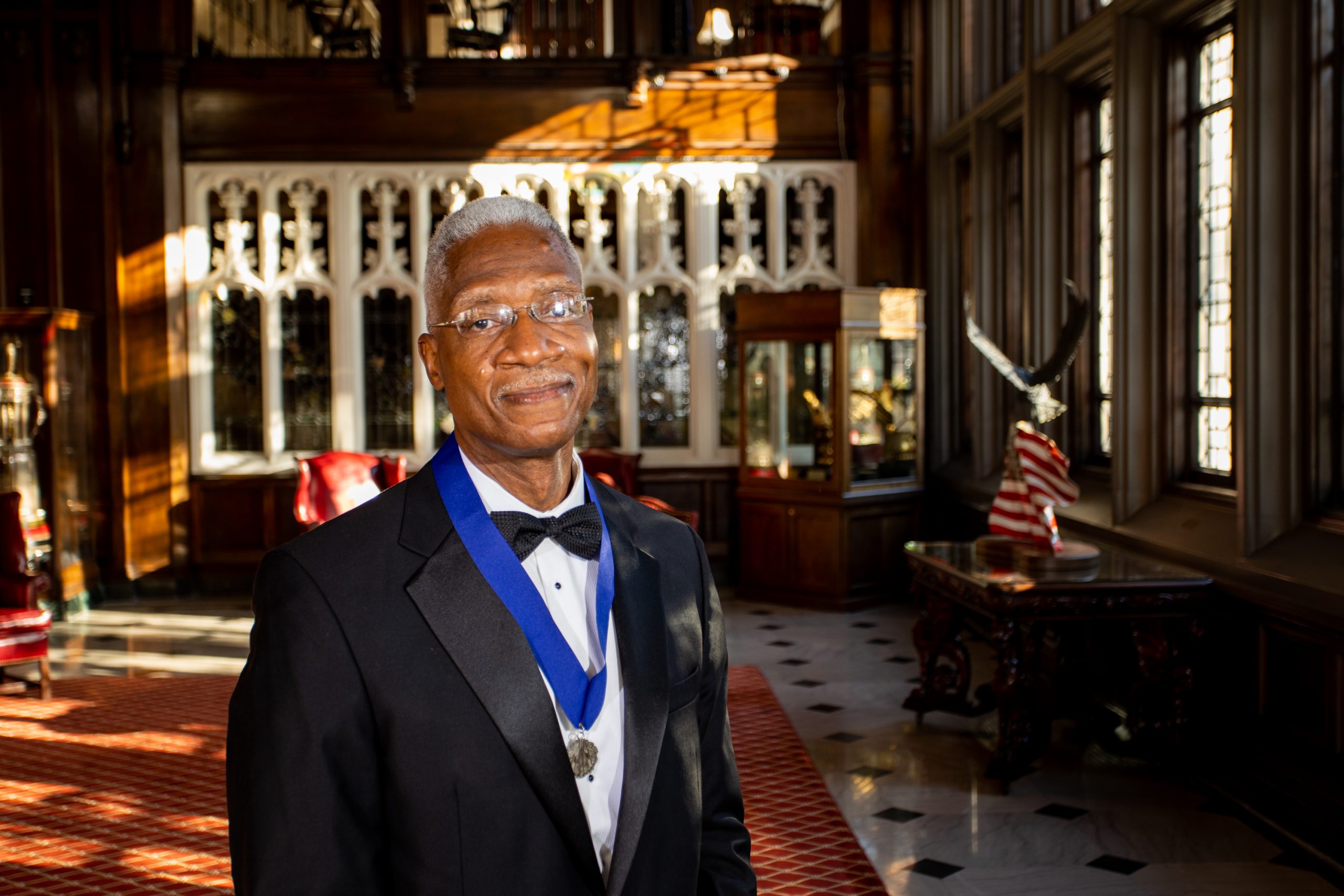 Dennis Bland is president of the Center for Leadership Development (CLD), an Indianapolis non-profit organization dedicated to empowering African American youth for the highest academic and career

In 2004, Bland was appointed to the Indiana Commission for Higher Education, and he continues to serve in that capacity today. He also serves on the Citizens Energy Group board of trustees and on the executive committee of the Indiana Education Alliance.

In 2016, Bland was awarded the Sagamore of the Wabash by Governor Mike Pence. 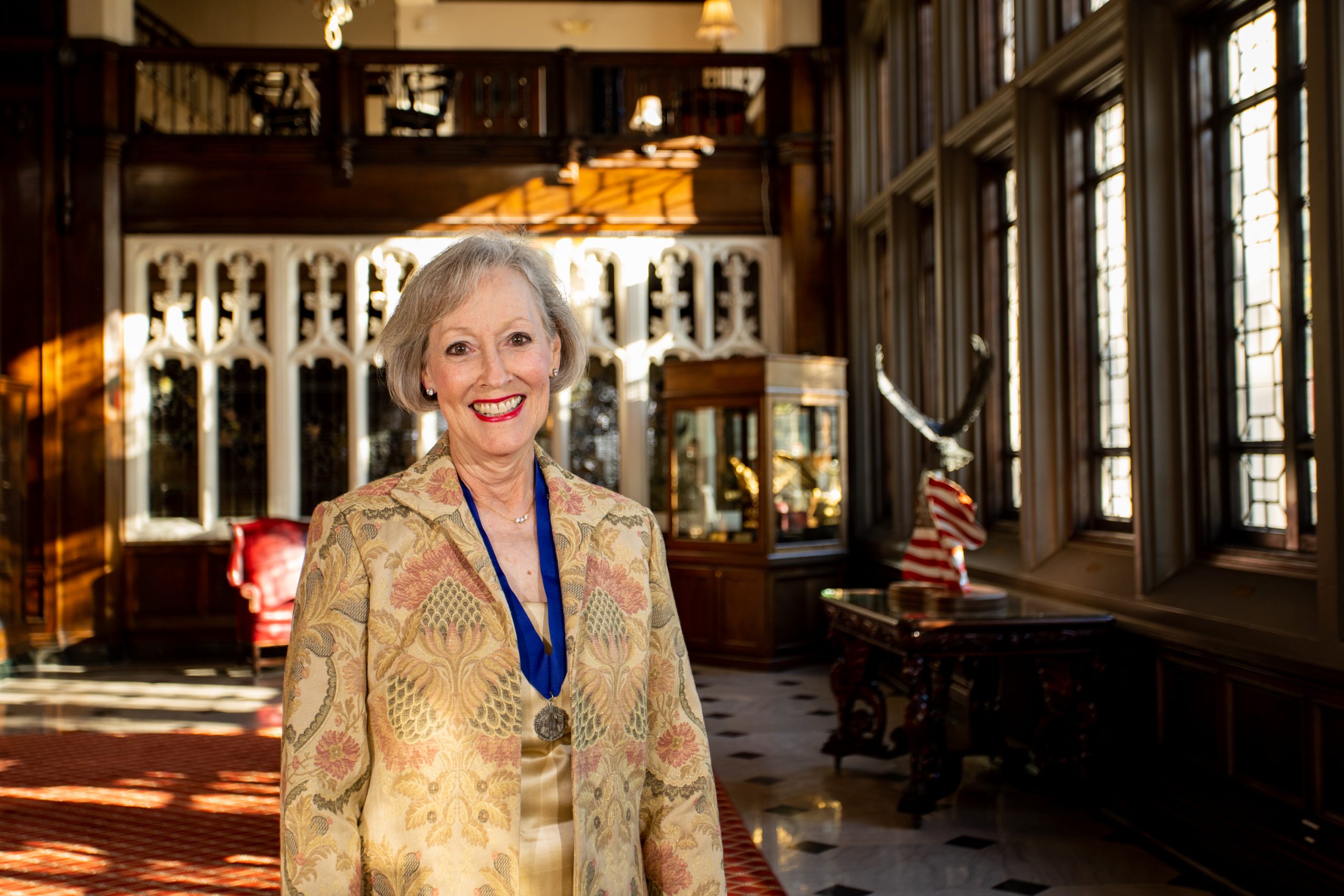 Sara Busche Cobb joined the staff of Lilly Endowment Inc. in 1997 as program director for higher education. During her long tenure she supervised more than 8,000 grants to help improve the educational attainment levels of Indiana’s residents and their abilities to find meaningful employment; to build the state’s intellectual capital; and to improve educational opportunities for African American, Hispanic and Native American youth around the country.

From 1999 to 2019, she served as vice president for education. In this capacity, she supervised the Endowment’s grantmaking to advance opportunities in early childhood education, elementary, secondary, and higher education programs, as well as workforce development.

Cobb came to the Endowment with a rich higher education background after having served at the Indiana University Foundation, the University of Denver, and San Joaquin College of Law in Fresno, California.

Cobb is a graduate of Purdue University and the Indiana University McKinney School of Law. She and her husband, David, are the parents of three children—Caroline, Melissa, and Lewis. She is a recipient of the Sagamore of the Wabash award as well as the Indiana Youth Institute’s James T. Morris award. 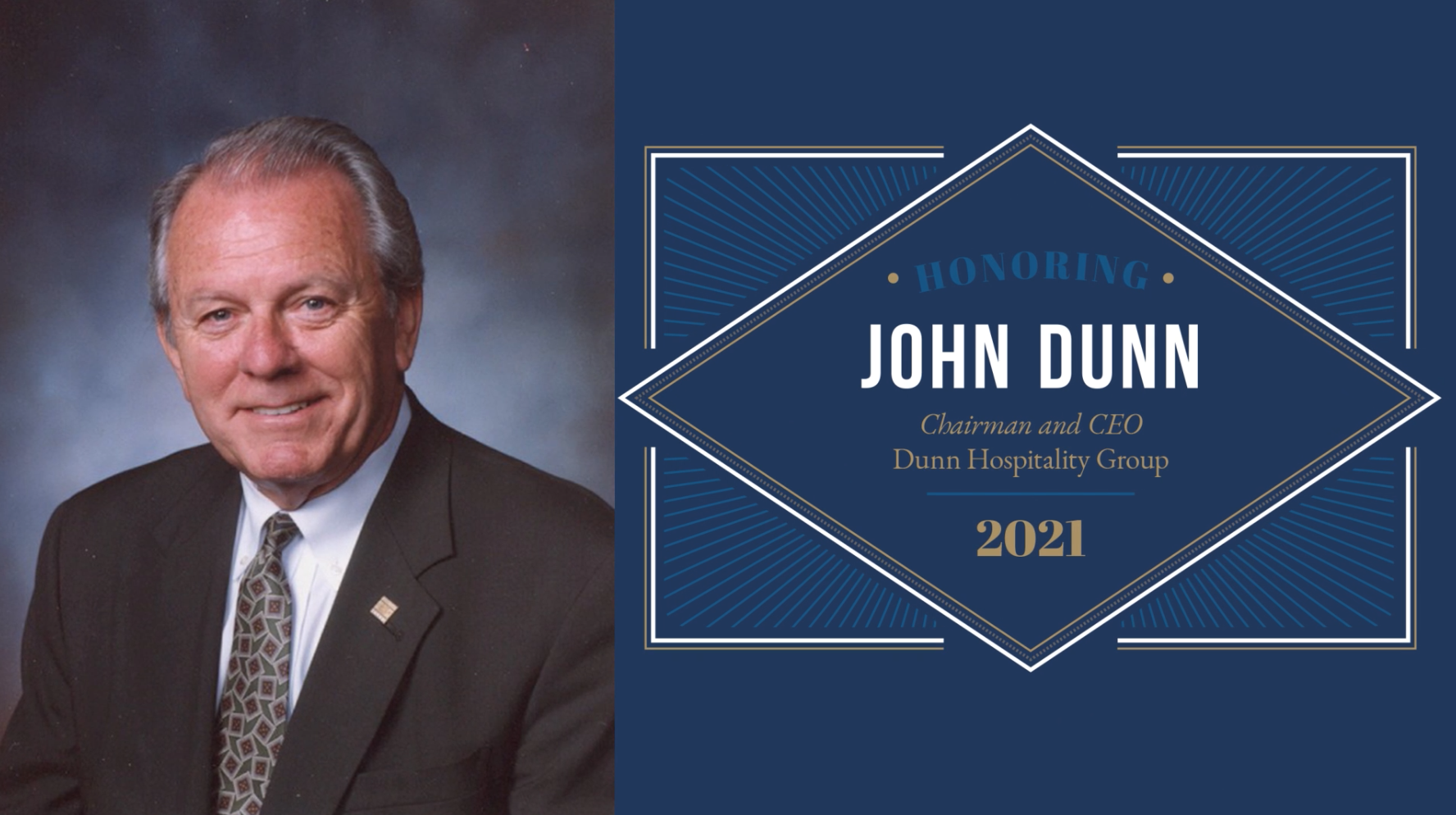 An Evansville native, John Dunn founded the Dunn Hospitality Group in 1978. Since that time the group has built or acquired over 50 hotels in Indiana, Illinois, and Kentucky. Dunn continues to serve as their chairman and CEO.

He has retired from the corporate board of directors for South Central Communications, Inc., Old National Bank, and Vectren, Inc. He also served on the board of directors for Boys and Girls Club of Evansville, Southern Indiana Chamber of Commerce, YMCA, and the Salvation Army, and is the past president of St. Mary’s Health Systems Seton Corporation.

Dunn is an alumnus of Oakland City University. He served on Oakland City’s board of trustees for 12 years and was awarded their Honorary Doctorate of Humanities. He also holds an honorary doctorate from the University of Southern Indiana. 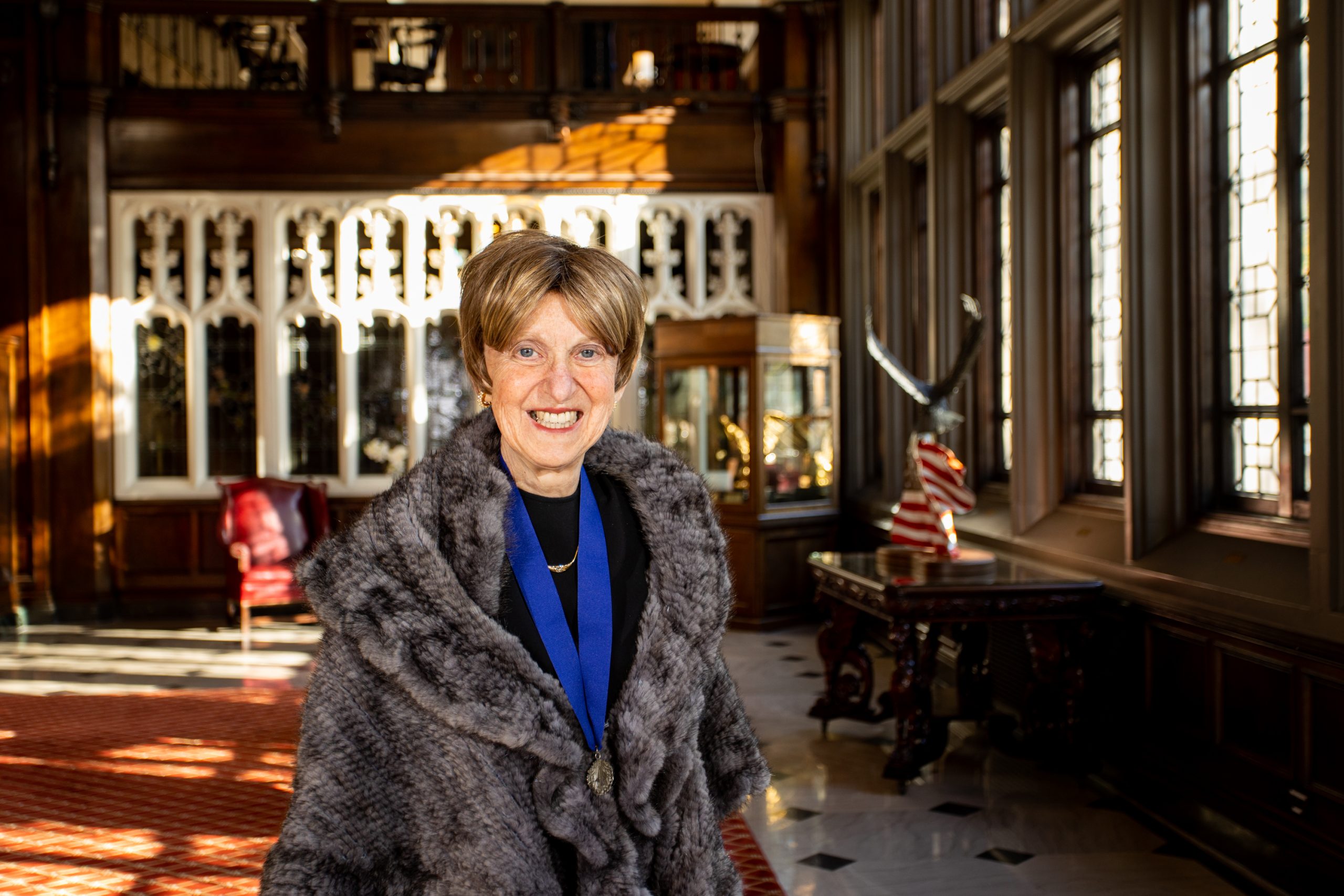 Linda White has worked as an administrator at Deaconess, in Evansville, since 1985, serving as president and CEO of the Deaconess Health System for 15 years. She currently holds two positions, chief administrative officer of Deaconess Henderson Hospital (formerly Methodist Hospital) and executive director of the Deaconess Foundation.