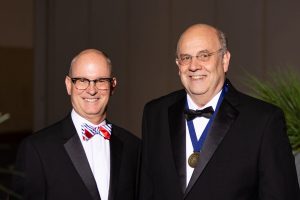 Wade Clapp, MD
Distinguished Professor and Chair of the Department of Pediatrics, IU School of Medicine
Introduced by: Dr. Lake Lambert, President, Hanover College
Wade Clapp, MD, is a distinguished professor, the Richard L. Schreiner Professor of Pediatrics, professor of microbiology & immunology, and professor of biochemistry & molecular biology at Indiana University School of Medicine. In 2009, he was appointed chair of the department of pediatrics and physician-in-chief. Clapp provides service to several organizations, locally, nationally, and internationally. He leads both local and national diversity scholars programs to train physicians and physician-scientists, he provides service as an officer in the Association of Medical School Pediatric Department Chairs, and he is the chair of the Medical Advisory Board for the Children’s Tumor Foundation. Clapp serves on the board of trustees for Hanover College and is the recipient of their distinguished alumni award. 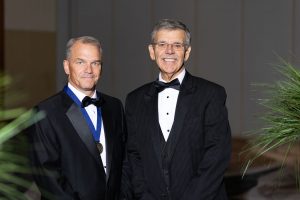 David M. Findlay
President and Chief Executive Officer, Lake City Bank
Introduced by: Dr. Earl D. Brooks II, President, Trine University
David M. Findlay currently serves as president and chief executive officer of Lakeland Financial Corporation and Lake City Bank, headquartered in Warsaw, Indiana. Lakeland Financial Corporation is a publicly traded (NASDAQ Global Select/LKFN) bank holding company with total assets of $6.6 billion and 52 offices located throughout Northern and Central Indiana. He serves on the board of directors for Parkview Health, a Fort Wayne healthcare system that collaborates on health professions programs with several ICI member institutions including Huntington University, Manchester University, University of Saint Francis, and Trine University. Findlay is a graduate of DePauw University and currently serves as a trustee of Trine University. He previously served as a state trustee of Ivy Tech Community College and a member of both the alumni board and board of visitors of DePauw University. 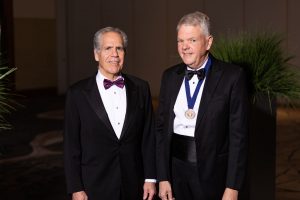 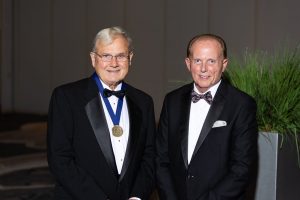 Niles L. Noblitt
Chairman of the Board (retired), Biomet
Introduced by: Robert A. Coons, President, Rose-Hulman Institute of Technology
Niles L. Noblitt is a retired chairman of the board for Biomet, Inc., a Warsaw, Indiana-based biomedical company he co-founded after graduating from Rose-Hulman in 1973. Noblitt received an honorary doctorate in engineering from Rose-Hulman in 1996 and was named chairman of the board of trustees in 2018. In 2020, Noblitt and his wife Nancy, donated $10 million to Rose-Hulman to aid in recruitment of the nation’s top students and support their success through graduation and beyond.

The Indiana Academy honorees are recognized annually for lifetimes of achievement and contribution to the state of Indiana. Members of the Academy demonstrate exceptional leadership in philanthropy, business, public service, advancement of the sciences, the arts, literature, culture, and scholarship in connection with Indiana’s independent non-profit colleges and universities. Bios and introduction videos for all inductees can be found here online.

“We were delighted to honor the 2022 class of inductees at a special gala in Indianapolis,” said Kurt D. Dykstra, president and CEO of Independent Colleges of Indiana. “This is an incredible group of leaders, and we’re grateful to each for their impact upon our campus communities and upon the State of Indiana.”

During the event, Deborah J. Daniels, JD, chair of the Indiana Academy Board of Regents and partner at Krieg DeVault LLP, announced on behalf of the Regents their financial support of the ICI Leadership Academy. This year-long program was launched in 2020 and specializes in the talent development needs of faculty and staff members of private college campuses. You can view the video announcement here online.

“In order to truly live the Indiana Academy’s mission, we feel it’s important to help develop the future leaders of these ICI institutions,” said Daniels. “We think the best investment we can make is in those leaders of tomorrow.”

About Independent Colleges of Indiana
Independent Colleges of Indiana serves as the collective voice for the state’s 29 private, non-profit colleges and universities. ICI institutions employ over 22,000 Hoosiers and generate a total local economic impact of over $5 billion annually. Students at ICI colleges have Indiana’s highest four-year, on-time graduation rates, and ICI institutions produce 30 percent of Indiana’s bachelor’s degrees while enrolling 20 percent of its undergraduates.