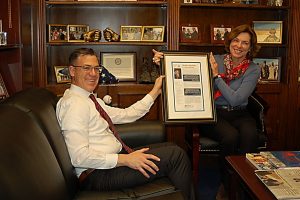 “As an independent college alumnus and former state association board member, Rep. Banks understands the unique roles independent colleges and universities play in their communities,” Mistick said. “He is committed to ensuring students and families from all economic backgrounds have access to the financial aid necessary to make college choice possible for students to achieve their dreams of a college degree.”

Rep. Banks, who has served in the U.S. House of Representatives since 2017, was presented with a framed replica of his CICCMember Spotlight by Mistick during a meeting in his office on Capitol Hill. He is a member of the House Committees on Education and Labor, Veterans’ Affairs, and Armed Services.

“Independent colleges make unique and significant contributions to their communities — economically, intellectually, culturally and spiritually,” Rep. Banks said. “They greatly benefit our local economy and culture from their involvement in our community and the skills and temperament they impart to graduates. The many independent colleges in northeast Indiana provide quality accessible education to students from near and far, while employing hundreds of people and providing a plethora of cultural and entertainment opportunities.”

“Two major problems with education are affordability and the growing skills gap in the U.S.,” Rep. Banks said.  “Like many Americans, my family and I struggled with figuring out how to pay for my college. While I was fortunate to choose a career path that led to gainful employment, many are not as lucky.”

He added:  “Currently, 100,000 jobs in Indiana are unfilled because workers do not possess the requisite skills needed for those jobs. I recently introduced legislation that would increase flexibility in the Pell Grant program to help lower the costs of education in career fields most sought after by employers. This common-sense bill would help shrink the skills gap while providing valuable financial resources to students.”

Banks earned a bachelor’s degree from Indiana University and an MBA degree online from Grace College while working in commercial construction and real estate, and serving in the U.S. Navy Reserves.

“The skills I learned at Grace helped me in each of those endeavors and continue to serve me in the halls of Congress,” Rep. Banks said. “My education also influenced my worldview and enhanced my faith.  For me, college is not just an educational journey but a spiritual one as well –- something that the many thousands of other independent college graduates understand as well.”

“Rep. Banks seeks to understand the challenges and opportunities independent colleges face, and he works to offer meaningful solutions and ideas to them,” Katip said.  “He is also attuned to the needs of businesses for a more skilled workforce and champions programs that make college as affordable as possible. I appreciate his willingness to ask questions, learn and engage on our issues. We are proud to have Rep. Banks as an alumnus of Grace College and our representative in Congress.”

“Rep. Banks has been a loyal supportive friend to Northeast Indiana and higher education. He is always eager to understand our issues related to affordability, financial aid, Pell Grant support, addressing the skills gap, and the Higher Education Reauthorization Act…..he makes it a point to be well informed to represent our views.”

“Congressman Banks fully engages with the higher educational institutions serving his constituencies,” Emberton said. “While a state senator for Indiana, he served on the President’s Advisory Council for Excellence at Huntington University.  He also made time to be part of the Independent Colleges of Indiana Association as a legislative representative.”

“Independent Colleges of Indiana considers Jim Banks one of our own,” Wantz said.  “As an alum (MBA) of one of our colleges, former ICI Board member, and Indiana General Assembly representative, and now member of the U.S. Congress and House Education and Labor Committee, Rep. Banks has always been an advocate for and friend to our 30 private college and university members.”

The Congressional Independent Colleges Caucus (CICC), launched in February 2017, offers Members of Congress an opportunity to both celebrate and advance the diversity of the nation’s independent colleges and universities, and learn about the challenges and issues these institutions face.  The Caucus, led by co-chairs Rep. Martha Roby (AL-2) and Rep. Derek Kilmer (WA-6), has grown to 78 members.